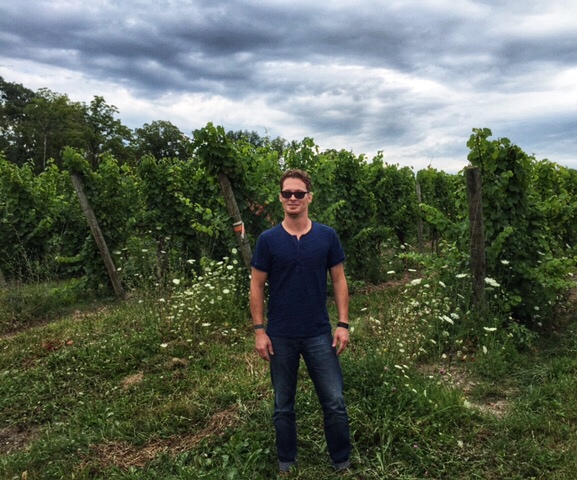 Michael Reidy hadn’t planned to enter the wine industry. In fact, although the Hazlitt 1852 Vineyards winemaker attended Cornell’s Viticulture and Enology program, he only intended to glean what he could of the science and bring that knowledge to the beer industry, where his father worked before him. But a short while into his time at Cornell, things changed, and Reidy found himself on a path that led away from breweries and toward a fruitful career creating Hazlitt 1852 Vineyard’s award-winning vinifera wines on Seneca Lake.

Soon after graduating from Cornell in 2006, Reidy took a position as assistant winemaker at Hazlitt 1852 Vineyards in Hector, New York, on the east bank of scenic Seneca Lake. This job offered the recent graduate a chance to refine his skills by monitoring fermentations and helping ensure everything went according to plan. But it wasn’t until January of 2011 – when Hazlitt purchased another location in Naples, New York – that Reidy was presented the opportunity to truly make his mark.

Taking on the role of head winemaker granted him the ability to flex his creative side more than ever before. Soon he began to garner a reputation as someone who was willing to stray from the beaten path. “I have kind of a reputation for being a bit of a mad scientist,” Reidy said. While many Finger Lakes wineries test their ideas with small batches, Reidy rejects those tactics, because they’re difficult to scale up. Instead, he experiments without hesitation, which lends his work a unique style. And experimentation brings him back to the reasons he was interested in wine in the first place. He notes that he enjoys “the fun of the underlying science there – it’s an art form that you’re doing, but every year is different.”

And based on the many awards achieved by Reidy’s wines, he’s perfecting his art form. One of his earliest successes at the winery came in the form of a barrel of 2010 Chardonnay sent to California to compete in Jerry D. Mead’s New World International Wine Competition. California is well-known for its top-quality Chardonnays, but Hazlitt’s offering surged ahead of the pack to win best overall Chardonnay. Many more awards were to follow as Reidy continued to help establish Hazlitt 1852 Vineyards as a true force in the world of vinifera wines. “It’s fun to win people over who associated Hazlitt with a certain kind of wine,” he notes, “and to have people realize that there’s a whole other aspect of it with high-end reds and whites.”

Those high-end wines define Reidy’s work and a transformation of Hazlitt itself. While production of the vineyard’s beloved Red Cat and White Cat varieties continues in Naples, Reidy can be found whipping up vinifera wines, a name inspired by the types of grapes used in their creation. Furthermore, many of these wines have achieved 90-point ratings awarded by Wine Enthusiast magazine. Reidy explained that these high-end selections represent a more subtle side of Hazlitt 1852 Vineyards that’s an exciting, and always growing, part of the vineyard’s story.

The latest vinifera wines showcase a change in Reidy’s work, too. “The wines I was making my first couple years were really big,” Reidy says. “I always likened them to a teenage boy.” But more recently, Reidy has transitioned to what he describes as a more austere, refined style of winemaking. The result? He’s still having a great time, but you can expect more nuance and sophistication from his latest vintages. “One of the cool things is that, as a winemaker, I essentially make wine for myself,” he explains. “Hopefully there are enough people out there who will enjoy it as well.”